It was an inauspicious start to the day, I got up early did a couple hours at the side job, where it was overcast and prospect of rain seemed to be omnipresent, but the temperature was a balmy 77 degrees, a welcome relief from the stream of humidity that had become commonplace over the past couple of weeks.

In keeping with my custom on overcast days, I opted for contact lens in place of the polarized prescription sunglasses or transition frames used to protect my eyes from the UV rays of the sun.

On this day my wife and I committed to attending the National Book Festival in Washington D.C later that morning.

She had designs on having her book signed by an author whose name escapes me at the time of this writing – while I was looking forward to hearing Stephen King discuss his creative processes.

We were able to catch the tail end of the Stephen King discussion before he opened up the floor for questions from the audience.

It was a good day.

We left out and made our way to another part of the Center to listen to Kareem Abdul-Jabbar, another one of my favorite writers, discuss his new book.

We caught the entire discussion and I was inspired as he mentioned, that in spite of his holding the record as the NBA’s all-time leading scorer – that in reality he was just a writer, that happened to be playing basketball.

Again – it was good day. 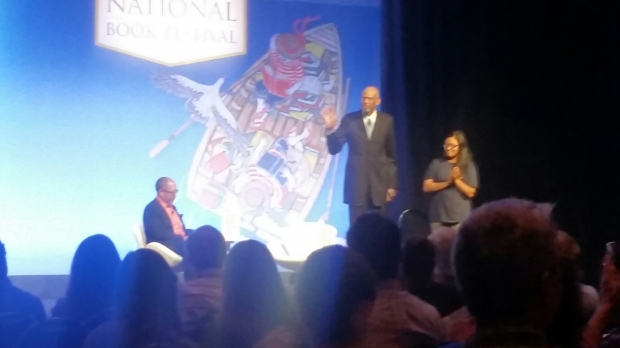 I was convinced that it couldn’t get any better.

On the flip side…

September 24th was the day the National Museum of African American History was slated to open its doors for the first time, a mere century after a resolution was initially proposed in 1916 by Rep. Leonidas C. Dyer, calling for a monument honoring  African-American veterans.

“As fate would have it, my 3rd Great Grandfather was a veteran of the American Civil War, born in bondage on Valentine’s Day 1840, he later enlisted in the Union Army during the war, rising to the rank of Corporal before he was discharged.”

The tickets to the museum were free, but reservations for timed tours were booked up through December of this year and unfortunately, we missed out on being one of the lucky recipients. 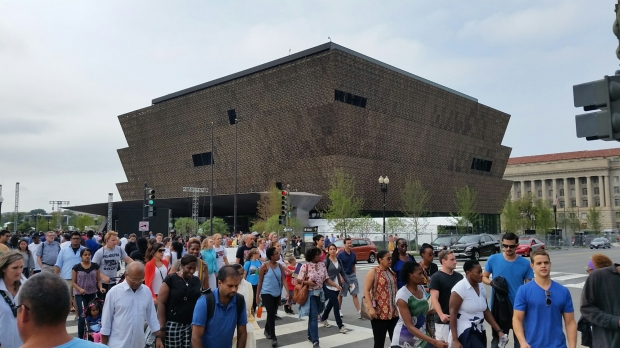 We made our way over to the building to survey the architecture – with no illusions on making into the museum for the inaugural event, being content with just seeing the museum and taking in the assorted events in Mall as a consolation prize of sorts.

As we walked on the Mall under the shadow of the Washington Monument, we happened upon a charging station – an oasis for people with dead or dying Smartphone batteries, we stopped and plugged in our devices and waited.

While standing among the mass of people crowded around the Charging Station – there was break in the clouds and the sun began beating down on us and the rest of the attendees, I squinted, shielded my eyes with my arm and cursed the decision to go with the contact lenses.

After charging the Smartphones up enough for our purposes, we made our way over to an oral history event that featured spirituals, call and response and a display of implements used by enslaved people during the antebellum period.

We also listened to a student group perform a bevy of songs from Prince’s collection before we started towards the exit.

While we were walking back, I found myself wondering if my ancestors had sung any of those spirituals that were stuck in my head.

Wondering – if they had been inspired by them.

Wondering – if those words had afforded them with the fortitude to press on when their situations seemed to say otherwise.

Only for my thoughts to be interrupted.

A young woman made her way over in the direction of my wife and I, asking if we were headed to the museum…

We replied that we weren’t, as it was reservation only.

She pulled two sheets of paper out from this bundle that she had in her hand saying:

“Well, if you want to go, I have two passes here.”
I exchanged a puzzled look with my wife before asking:

“There’s no catch sir, we just have other options and we wanted to bless someone else’s day!”

And – before I could process this fortuitous turn of events, my wife had plucked the passes from her hands with a wide Cheshire Cat smile she tendered a full throated and melodious:

We watched them walk off as we pivoted and started off in the opposite direction, making our way through a sea of people to take our place in this long snaking line.

We debated if we really wanted to wait, but reasoned that this once in a lifetime opportunity – to be one of the first people to set foot in this museum was not to be missed.

We waited over 90 minutes, listening to the conversations of the people around me, peppered with the sounds of my knees and IT band cracking, but I endured. As we got closer to the entrance the excitement began to build – I likened it to an ethereal electricity of sorts pulsing through my veins.

After what seemed like an eternity, we finally made it!

The images from the books I read throughout the years were flashing before my eyes with the concussive force of their consequence.

Those mandates from my Father to be cognizant of history – those summers in the living room reading books that spoke of a rich history of the African-American experience that filled the gaps from what I was taught in school, which lacked a lot of context.

That Black people were slaves –

Abraham Lincoln freed them with the Emancipation Proclamation –

Dr. Martin Luther King, marched on Washington to give the “I have a Dream Speech” and Black people were able mystically able to vote…

This museum is truly a marvel of cultural, educational and patriotic significance that flies in the negative commentary that it has been subjected to – this is a truly an American story, which one humanizes and gives a voice to those who were told that their contributions were non-existent or bereft of substance…

We only had 90 minutes to make our way through the confines of the museum, but in all honesty one would need at least a day to take it all in.

Although I didn’t cross paths with that picture of my 3rd Great Grandparents, yet I couldn’t help being aware of an indelible truth.

That I am the son of those who refused to die….