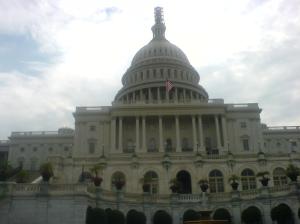 Sammy surveyed his surroundings backstage and he was calm; serene even, not unlike a Buddhist monk in the confines of a remote monastery. But, he couldn’t shake the nagging pull of logic dictating that he should be nervous, as he was in uncharted territory. On the other hand maybe it was possible that he was projecting his nervousness elsewhere and it was apparent where it had landed, as he noticed that his PR director, Thomas Cash or T.C as he was widely known, visibly flustered and it was obvious that he was unable to hide his angst between the beads of sweat erupting across his forehead, the rapid shaking of his hands and his fumbling of answers to questions that he was presented with minutes before Sammy was to make his first appearance on Good Morning Chicago.

This was to be the first in a series of TV appearances; his congressional campaign was taking off exponentially with donations coming in from all over the country with no sign of it abating and everyone; with the exception of Sammy, stood in awe of what was taking place. It was a novel concept to run for Congress on the platform of talking about what they were going to do with the perks of the office, versus the standard obligatory talk about what the candidate was going to do for his constituents and the country at large.

It was his contention that voters respected authenticity, not someone who would blithely blow smoke up their ass. Sammy made it known that he was in it this race to get the six figure salary; short work days; long vacations; the best health care on the planet; free sponsored lunches from lobbyists and most importantly, the Congressional pension. It was the pension that would allow him to pull more in retirement than he ever could working… Who needs the lottery when you could run for Congress where the odds are dramatically better? This was the logic that he often employed and the proof was in the pudding, it was paying dividends as his candidacy was no longer a long shot, his election was now a certainty. This was truly the American Dream, a dream that any red-blooded American would aspire to, if they only had the means to bring it to fruition.

Besides, he knows that Americans are too doped up on a steady diet of Reality TV to see past the shameless narcissism of his campaign. On a good day they were only partially paying attention and this apathy was the wave that he was riding; as they merely saw someone, who like their favorite characters on the litany of Reality TV shows littering the airwaves; living the high life while keeping them entertained in the process, his constituents could live vicariously through him he reasoned.

“Wait for your cue, before you walk out Sammy”, T.C stammered. “Relax man, you’re going to give yourself a heart attack and with your luck, no one will be around to give you CPR, I can’t afford you dying on me, I need a ringmaster in this circus” Sammy chided, and at that moment he heard his cue, “Let’s extend a warm welcome to the candidate for Congress from Illinois’s 13th district, Samuel I. Hustlemore!” and with that he sauntered out onto the stage with a wide grin that would have put the Cheshire Cat to shame, giving the crowd a passionate wave with the both of his hands.

The fictional exploits of Samuel I. Hustlemoore, the unlikely but authentic Congressional candidate