There are a number of things that I aspire to stay away from. Some of those things being red meat, poultry, religion (conversationally), comment boards and the arguments that they spawn in the blogosphere.

I was on my little used Twitter account at the height of the Michael Sam kissing hullabaloo a couple weeks ago when I saw an ongoing trail of invective about it, letting my curiosity get the best of me, I started reading through some the threads.

Ironically, some or the most hateful invective I saw was spewed from the lips of (his name is unimportant) a columnist and a self-described ordained minister with an audience, that I can safely say numbers over a couple hundred people.

For him to be a minister, I expected some semblance of love and deference to the Holy Spirit to be omnipresent in his dialogue, but instead there seemed to be a heavy layer of loathing, condemnation and judgment. So I felt compelled to pose what I felt was a straight forward question.

My query to him touched on the fanatical concern that many heterosexual and self-proclaimed religious people have with the affairs of gay people. When there is so much work that we as human beings have to contend with in our respective lives, why are you so concerned?

In short how do the personal inclinations of others impact, interfere and infringe on ours and why should we care? Is it a belief that “gay” is contagious? Given the fact that I am solidly heterosexual my standing is not impacted by gay people having a desire not to be ostracized merely for being who they are.

He responded and so began the back and forth on Twitter.

He started off advising me of my obvious lack of understanding that I had of the Bible and of God’s law. He then followed that with a proclamation of Michael Sam being an “amoral” being.

It is my contention that I’m amoral a couple times during the course of the week (especially in rush hour traffic).

Just like the rest of humanity, I confess to being a hot mess!

I mentioned Matthew 7:1, where Jesus states:

“Do not judge or you too will be judged”, but he countered that I didn’t have the insight to reference the Good Book, so much for my vaunted reading comprehension skills.

I countered that Michael Sam’s actions and that of the gay community as a whole does not have any impact on me was of little consequence, and he summarily branded meas a sympathizer damning me to hell alongside the rest of the sinners.

It was obvious that he had everything all figured out and no one could tell him otherwise, he was the pinnacle of flawless humanity if you let him tell it.

I got the impression that he was trying to goad me into an argument, but I wouldn’t take the bait. Eventually, the tug of war stopped as a quote from Mark Twain popped into my head:

“Never argue with a fool, because onlookers may not be able to tell the difference”

Summarily, I deleted the entire exchange from my Twitter feed, somewhat disappointed that I even gave it a couple minutes out of my life that I will never get back.

If it is fanatical or sinful for me to have the audacity to regard a person who happens to be gay as merely another human being who is deserving of the same respect I think I should be accorded?

If so, I guess I’ll have to resign myself to my fate.

Can gay people get a whole slice of liberty? 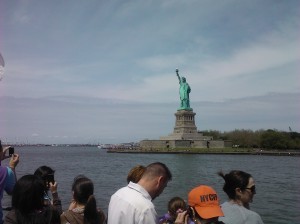 My first trip to Ellis Island in 2011

The bigger question is this and I’ll pose it to you, my readers… An open forum if you will.

When people wrap themselves so firmly in the Bible, why is that they feel impervious of their own shortcomings and subsequently deputized to condemn everyone that does not agree with them?

The inclination towards being judgmental isn’t unique to Christians, this moral grandstanding applies to a host of other belief systems as well, and can be accorded to anything that people are passionate about.

In short, is it too much to fathom a scenario where we all accept the reality that we are a hot mess or would that be too much like right?

Author, Genealogist, Writer, Poet, possessor of 2 cents, blogger and eternal student of life, who harbors a firm belief in his Grandmother's mantra that: "People need to get off of their rump and do something". All while keeping in mind that a cheering section will often get in the way.