At the time of this writing.

I was sitting at the computer, scrolling through the cornucopia of family pictures that I’ve amassed through the years.

I was particularly entranced by the images of the younger incarnations of myself and my parents – when I slowly began to feel a smile spreading across my face.

Whenever I think of my parents.

Gratitude, love, faith and adoration are never far behind.

Truth be told, my cup overflows whenever I try to place my parents in a box.

I am fortunate enough to be able to pick up the phone and chew the fat with them, a blessing that I don’t take for granted.

And in the blink of an eye, I remembered something.

When I was growing up, my Dad used to make me read the encyclopedia’s that we had in the corner of the living room as a form of recreation.
During the summer months, I had to write handwritten reports that I turned in to him before he left for work in the evening.
If he deemed the writing smudged or illegible, he’d make me start the process all over again.

So, as a result I have impeccable handwriting nearly 4 decades later.

Even to this day…

I write as if my father is going to come bounding down the stairs to survey my work, only to tell me that I have to start all over again.

I hated these literary exercises with every fiber of my being.
I especially abhorred writing out mantras, like such as:

“I will be intelligent”

This was a punishment that I was required to write out, 100 times on college ruled paper with a #2 pencil. 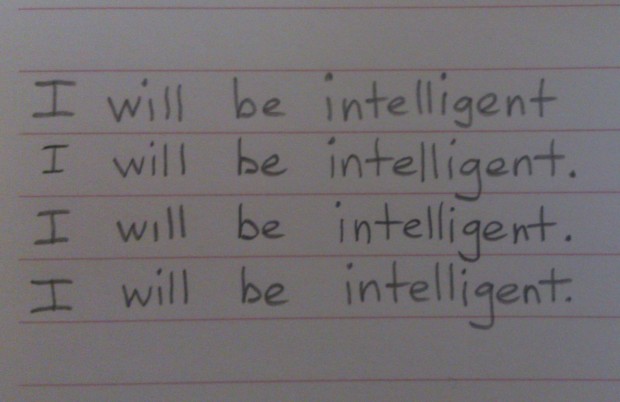 “Daddy, people say I talk funny, they laugh at the words that I use.”

(FYI… Reading an encyclopedia, would turn you into a walking encyclopedia after awhile too.)

If I had the gumption and wasn’t enveloped in the fear, respect and awe of the man towering over me I would have said:

They run through my mind and I use them without thinking about it. Telling the brothers in the neighborhood that their recalcitrance will lead them to a purgatory that their feeble minds will be unable to fathom – doesn’t exactly win me any converts.”

But, in retrospect it was more eloquent for me to cry, so that’s what I did.
Because in that moment, he told me something that I never forgot.
He sighed, sat down on the couch and I remembered a burdened look spreading across his face which worried me.
And he told me…

“Son, keep your nose in these books, because in midst of that solitude of you being misunderstood, you will find yourself, you understand me? Using these words will save your life!”

I lied and said:

Because, I couldn’t take another soliloquy, I just couldn’t… My young brain could only take so much.
So…
I stood there with my head spinning and wondering silently…

What the fuck does any of that mean?

I remember my mother poking her head out of the kitchen, rolling her eyes and smiling at me before ducking out of sight again.

Her levity always helped in deflating a tense situation.

Why do I remember this event from over 3 decades ago?
Because the moments from my childhood that used to give me pause, now provide me with clarity.
Now, I can laugh at those instances of “torment”.
Like the neighborhood bully who erupted in laughter, calling me a loser when he overheard me saying that I wanted to be a “newspaper writer“.
That bully in the form of my middle school teacher, who told me dismissively that I was just a “hoodlum in training” or my high school Division Teacher who told me that it would take me 5 years to graduate from high school, if I ever graduated.
I would bend, but I would never break and it was not because of sheer will.
Instead, it was because of something far simpler than that.
It was because of my parents.

The two people who were unceasing in their belief in me – who gave me love without conditions.

In the midst of a rebellious period during my youth, I had a epiphany when I was 16.

It was one of pure unmitigated fear.

It was the prospect of exhausting the reservoirs of the faith that they had in me. This realization was something that filled me with an uncertain dread.

I pivoted hard to right my ship – telling myself that I’d rather die than to let them down.

I graduated high school, on schedule.

I went to college and earned my degree in journalism.

I even went back to school years later and earned my MBA.

I wasn’t smarter than anyone else, but I was loved more than most.

I mention this because in this uber-connected world we are quick to look for authentication in those who ONLY harbor a love of what we can do for them.

When I look for support in venues only to hear echoes of nothingness, I don’t hang my head anymore.

I stand encouraged knowing that I have the support of the 2 people who redeemed me by the sheer power of their love.

What else do I need?